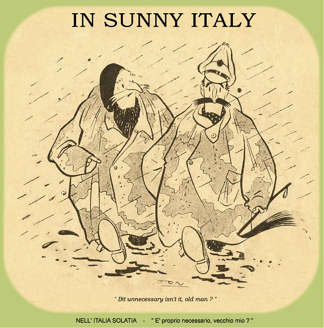 **Grand opening December 2006 ** - The panels were first exhibited on December 16th 2006 at Suffragio Church in the town of Bagnacavallo (click on the link to see videos).

In spring 2007, the exhibition moved to the town of Lugo, first to Trisi High School, and then to Trisi Library, where it remained in the months of April and May.

On May 5th, 2007, broadcast live from the studios of the local television channel Canale 11 in Imola, some members of the research group had the opportunity to discuss their group’s activities as part of Lugo’s University for Adults, and in particular to talk about the travelling exhibition.

From May 18th, 2007 ithe exhibition opened in the town of Villanova di Bagnacavallo as part of the celebrations in honour of the Canadian veterans who were visiting our province.

It was in November 2007 that our travelling exhibition, which of course was already written in both Italian and English, crossed national borders to arrive in the United Kingdom towns of Stone and Stafford.

After returning to Italy, in 2009 the panels were used for an exhibition in the coastal town of Cervia.

Below you will find an interview which we gave at the local Canale 11 television studios introducing the exhibition and the research work we had carried out.